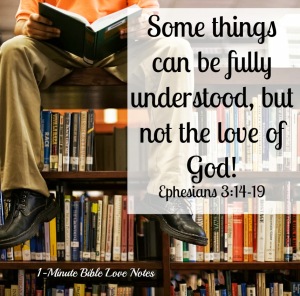 This chapter has been dubbed, “”The error of Balaam”—ignorance of God’s righteousness.”

Balaam has now come to Balak, the king of Moab. Balak takes Balaam to the top of a mountain so that he can see the camp of Israel below. Balak is not satisfied with any of the prophecies of Balaam; so he will take him to four different mountains on four different sides of the camp.

The world does not understand that and neither did Balaam. He thought that God must condemn Israel. He figured that if God was going to judge Israel, he might as well get the benefit of the rewards from King Balak; thinking that God would condemn Israel and that he would be permitted to get a handsome reward as a result of it.

Aren’t you relieved? I am! Disciplined for our sin, not condemned. That’s not to say the world isn’t out to get us or the devil doesn’t work overtime to discourage us, beat us when we’re down and rob us of our happiness and hope. Today, I’m thankful to have a God who knows my heart, has all things figured out, can right my wrongs and direct my path. I’m so glad that my God forgives, loves, redeems, restores, and rebuilds lives.