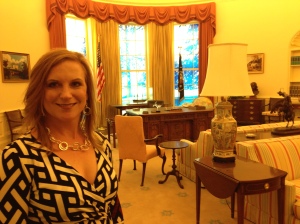 “Ah, Sovereign Lord, you have made the heavens and the earth by your great power and outstretched arm. Nothing is too hard for you.” Jeremiah 32:17 NIV

I passively listen to the news as I get ready for work and one of the daily topics appears to be who just announced their candidacy for the President of the United States in 2016. Every one of their nomination speeches tout, “I am proud to announce my candidacy for President of the United States.” Immediately followed by their prescription, “This is what America needs… my agenda.” This is great! We need to know who these people are and if they have the credentials to fulfill our nations top job, but they are mere humans declaring what they believe is best for an entire nation; that’s a bold decree which takes courage and confidence. I applaud them all, yet pause to question, “Whose agenda is best for us?”

Have you read 1 Samuel lately? I’m in chapter 13 where Saul gets his undies in a bundle because Samuel doesn’t show up at his said time and he decides to take matters into his own hands and disobeys God (and Samuel) by offering a sacrifice. We do that don’t we? We get anxious when God is not providing answers and take matters into our own hands. Instead of putting our faith in God and waiting on Him. We are prone to run to our religious rituals as if to speed up the process or control outcomes. Little do we know that God could be testing our obedience and patience; a tough place to be when our circumstances overwhelm us. Saul was feeling overwhelmed by the pressure of the Philistines. The world is overwhelming right now, let’s not be prone to wander away from God and cling to the most enticing nomination speech.

We don’t need a leader rushes in and tries to “fix” things.  In Saul’s case, God gave the people a king because they were asking for it, yet the king (Saul) was more about himself than he was of God and for the people. If we evaluated our presidential nominee’s to discern who are the God fearing men and women that would certainly narrow the candidate pool.

As a follower of Christ, I want a follower of Christ to lead our nation. Each nominee brings an area of strength that will make them best in some areas, yet ALL have weaknesses. On the candid roster, we have a blend of strong business acumen, military and foreign affairs guru’s, medical and healthcare experts, tenured government officials who “get Government”, but we don’t have one that is best at everything. In a time when understanding the world and the enemies in it is critical, when healthcare is overwhelming – yet necessary – for reform, our government is corrupt, economy waffling and our national debt compiling… Who IS the best man or woman for the job?

Here’s my proclamation. If we chose a Godly candidate, God will use their strengths for our benefit and he will fill in the gaps where he or she lacks. We don’t need a King Saul in the office of President, we need a committed leader of faith. So evaluate carefully America. A Christian doesn’t come with a party label of Democrat or Republican, race or ethnicity, age, gender, net worth, education or social status. God can use them all if they are true believers.